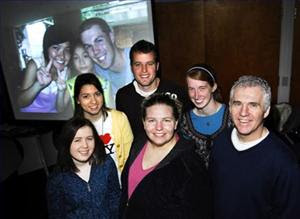 The day began just like any other, but turned out to be the one that changed her life the most. One morning in China, a ten year old girl’s mother instructed her daughter to “not come home from school that afternoon.” The daughter complied and went to her aunt’s home. A strange absence of news from her parents lingered for several days until the little girl heard that they had taken their lives. That was the day she became an orphan.

Nicole Chmelar recounted this story over the phone as she waited by Gate A3 at the Quad City International Airport. It was a gross exaggeration of a name for a place hidden in the cornfields of Iowa and possessing only one restaurant. But she was full of anticipation for her upcoming trips to Minnesota and Ontario, Canada for the Bring Me Hope 2009 Speaking Tour.

“I’m so excited to connect with the people hosting us and everyone we will meet there,” Nicole said. “But it’s definitely very interesting because I’ve never gone on a speaking tour before…” she said with a hint of humor in her voice.

Preparation for the tour included a variety of practical to-dos, but looking over her journal from past trips to China proved to be especially helpful. “Reading over the stories I experienced with the kids made me remember why we’re doing this,” she said.

“She has so much hurt,” Nicole said referring to the girl who became an orphan at age ten. “But I saw the difference that the time at camp had on her. It helped her to heal. Now I want to share with other people how they can change lives like hers. But hey, I’m on the plane now, so I have to go. I’ll be in touch, ok?” And with that, the kick off of the ’09 tour began.