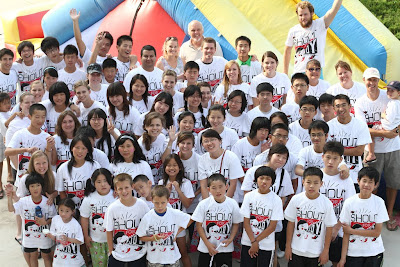 This week the Yantai camp went from a preschool to a high school! While we still had a couple of younger kids, the majority were teenagers! We were also once again blessed with an abundance of boys, which made things more complicated for our female volunteers and translators. But they stepped up and loved their boys like the sons, nephews, or in some cases bigger brothers they might have been.

We had one minor visit to the hospital, but thankfully it turned out to be a precautionary step rather than a necessary one. A young boy who had a small lump on his cheek that was at first feared to be mumps turned out to have a single cavity! He was able to return the same day with a smile and a clean bill of health for the week.

Since we had so many larger boys pool time was a much more active endeavor than the previous week, and the small ball games and swimming lessons were overtaken by water fights, splash wars and a game of keep-away that eventually devolved into a full contact game of “tackle the guy with the ball!” Speaking of water-based events, we were able to get our waterpark up and running and it was a big hit. A giant waterslide led to flips, slips, jumps, push wars, water hose battles ad a few accidental trips downward. The kids had good times pushing their buddies down the slides, and the buddies had fun chasing their kids back up to ride again.

Unfortunately the trip to the amusement park was cancelled for logistical reasons, but it was replaced with a new game for the camp, a scavenger hunt through the dorms that turned out to be really popular with the kids and the adults.

Staff members on different floors were holding candy and glowsticks, and three rice crispy treats for three lucky and quick scavenger hunters. Despite having so many big kids at the camp, it turned out to be the youngest team that was fastest as Carm, Spring, Casey and their two buddies Ya Ya, who is eight and Bai Bai who is six gathered up all six items and returned to win the prize: sodas for their next two meals.

A big event for the camp this week was the beach. We tried out a different one and found not only a better spot for swimming, but also a place to take rides on jet skis and power boats! Most of the kids had never been to the ocean and now we didn’t just get them into the sea, we took them speed along on top of it! A big highlight for everyone was a powerboat tour along the coast of Yantai that included views of cliffsides, cliff top temples and lots of dips and turns along the way.

There were the usual moments of tears and close calls, but also lots of joys and excitement as the kids just got to be kids. We learned a lot from hearing the stories of the children, and were astounded by the strength and optimism they showed even in the face of such hardships as they have all faced. We learned through life charts that some of the children had lost parents, others had been abandoned, but all came to us with open hearts and left with smiling faces.

Bai Bai was the youngest camper this week at about 5 years old, and despite being the smallest and youngest by leaps and bounds, she was also the most sassy. Her favorite word was “boo,” which means No. All week Carm and her translator have been telling Bai Bai “Wo Ai Ni” with little response. On the last night of camp Carm went in to say goodnight and gave Bai Bai a hug and said “Wo AI Ni.” Bai Bai looked up nonchalantly and replied simply “I know!” and smiled.

This week at camp there was a conference so our breakfasts were delivered to our rooms by staff members. The breakfasts consisted of meat buns, sweet pies and eggs that needed to be boiled in teapots. Suzanne did not know the eggs were raw when she went to have breakfast in her boys room. Lu Kai, the older boy, tried to warn her by saying “Sheng Da” which means “raw.” Suzanne thought he said eggs and cracked them open since she thought they were already hardboiled. She and her boys got a big shock and a good laugh when raw yolk splashed out of the eggs she had smashed together.

After craft time on Tuesday Bethany was walking with her buddy Donna and also with her younger sister, Riley. Donna was holding both of their hands and looked at them happily and said “You are my best friends.”

Patti is on her first trip to China and has never spoken Chinese, and her buddy Boi doesn’t speak any English. Patti was teaching Bo to play “go fish” and in the middle of the game he stopped her and taught her Chinese sign language for 1-10. Patti than taught him English sign Language for K, Q, and J ( King, Queen and Jack) and using sign language they were able to communicate and play together.

This week volunteer Vicky was assigned two boys of sixteen as her buddies and a translator who was so small the two boys considered her a little sister, even though she was six years older than they were! On the last day of camp as the boys were loading into the bus to go home Vicky signed “Wo AI Ni” to them, and was shocked and elated when both of the boys, who had been somewhat distant during the week, signed it back to her.