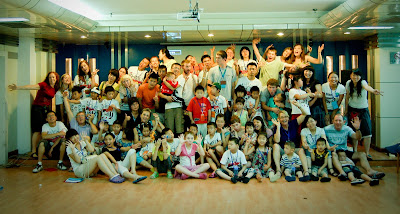 We were blessed to have 24 orphans and 12 volunteers take part in our first week of camp.

Our volunteers and staff teams are made up of people from Australia, Ireland, England, America, and China. We’ve had continuing jokes about not being able to understand each other, especially the Americans with the Aussie lingo. 😉 But in all seriously (which is a rare thing of us,) we have loved our joined unity over our common goal of helping the children.

We had two groups of precious orphans with us this past week, most of which were energetic boys. They had a blast visiting Ocean World, running through the Xian fountain show, and swimming, of course.

One 15-year-old boy named Loren made an impression on us all; he has CP, though that sure doesn’t inhibit his joy. He was constantly laughing at his silly 70-year-old English volunteer who sported goofy hats every morning.

Alan and Loren were quite a sight walking around the city of Xian together; with huge smiles on their faces, they would greet every (and I mean every) passerby with a big wave and a loud “NI HAO!” which means HELLO! They continued greeting people until they broke into a smile and give a little wave. The pair brought so much happiness to literally hundreds of city folk in Xian this week, but also to the rest of our camp and also to each other.

Memories and laughter characterize our week, and we are really grateful to the Lord for His provision and care to us.

With love,
The Xi’an Team