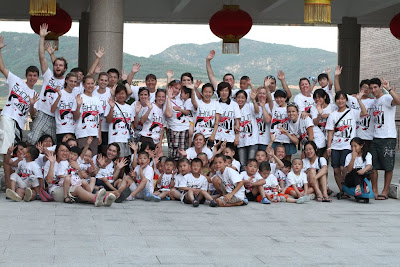 Our first week of camp is nearly over and yet the adventures are just beginning! Our children arrived and we were surprised to find that they were almost all toddlers or pre-school age. We were expecting a few kids around five and ranging up to twelve, but the oldest we got was about nine and we had more than a couple under four years old! The kids were mostly excited to jump into the activities of camp, and even the most reluctant children were excited when it came to pool time.

On the second day we had two boys who needed medical attention for pre-existing conditions.

Fu Ai Jhong, who is about 5 years old and called Eli by his American, Lydia, was suffering from eye inflammation that at first everyone thought was pinkeye. Teresa took him to the hospital to be treated and they found the eye was inflamed because Eli’s eyelid is inverted and his eyelashes grow upward into his eye, causing scratches that will eventually blind the boy. He will need surgery to correct the eylids, but in the meantime the doctors taped the eyelid down so that the eyelashes would no longer bother his eye. Eli was undaunted by his time in the hospital. He was so excited with the makeshift eye patch that the doctors have him that he dragged Lydia around by the hand so he could show everyone the tape holding down his eyelid.

Teresa also had to take Jing Chun to the hospital due to a severe cough. The doctors diagnosed him with a form of pneumonia and he would need daily I.V. treatments. During the treatments Jing Chun, who is also missing his right hand, bonded strongly with Teresa and took his treatments like a chamo, needles and all. During the group photo on Wednesday Teresa was showing him how to wave at the camera and Jing stopped her from waving and began to push some of her fingers out and others in. He showed her the sign for “I love you” in Chinese and began to tap each of her fingers and saying Wo Ai Ni, over and over. Wo AI Ni is Chinese for I love you.

Other stories from the first week of camp:

On a shopping trip to the local town Elizabeth bought her boys brand new shoes. An An was so excited by his shoes that he didn’t want to wear them, he held them out and showed them to people passing by while yelling “Xin de xie, xin de xie”…New shoes!

During most of the week Fu Xinhai has been closed off from his family group, partially because he is both deaf and mute. During dinner last night he surprised his translator, Michael, by sharing food not only with Michael but also another little boy at their table. After dinner was over Michael began to walk away, leaving some uneaten food on his plate. Fu collected the food from Michael’s plate into a bowl and followed Michael to make sure he finished his dinner.

Fu Au Chau is an autistic little boy who is very sensitive and was said to have a very difficult time connecting with anyone at his orphanage. At the beginning of the week his American volunteer Kim was having a hard time getting Chau to look at her or even acknowledge her presence even if she was right in front of him. Now at the end of the week Chau has come way out of his shell. He is affectionate and loving, always hugging and kissing Kim, calling her Momma and even telling her “Wo Ai Ni:”

During her first night with her baby Huan Huan Emma was woken up in the middle of the night because Huan Huan had fallen off the bed. The baby was getting close to crying when she saw that Emma had woken up. When Emma reached down to pick the baby up, the sadness left her face and Huan Huan smiled and reached up for Emma.

Lydia has had a very rough week with two little boys who were very energetic but nto very interested in connecting with her, they preferred just randomly picking buddies and randomly switching at any time. Last night, the last night before the kids return home, Lydia was putting her boys to sleep after spending some time coloring and watching them show off their artwork and she signed I love you to Eli, her deaf/mute boy and was amazed and excited when he smiled up at her and signed back I love you.

We had many firsts for the kids and also for BringMeHope. We took the kids swimming, which is always a highlight for them and for us and this year we even had an inflatable raft that they took rowing all throughout the swimming pool. We took them to a local amusement park and got to ride bumper cars, spinning dolphins and even a flying elephant ride. We even had a beach day full of sand and surf and all the crabs, clams and tiny little fish the kids could find. It is really amazing how much life there is in the beaches here!