Hi Everyone! Just wanted to share a few highlights (or unexpected moments) from China.

First of all, I am just AMAZED how God has opened the doors for orphans to come to summer camp. About 1 month ago we got word that all orphanages were not allowing kids to leave the orphanage in fear that they might get Swine flu from a foreigner.

The developing news looked so dismal that I was getting ready to fly to another country to see if we could set up camp somewhere else. But as I thought about leaving China, it was almost too hard to bear the thought. And so we prayed and asked others to pray and God did a miracle. I don’t even know what happened. But in the last couple weeks some of the orphanages started to be willing to send their kids to camp. Currently all camps are full!!!

But we are not out of the woods yet. Yesterday an orphanage canceled on coming to camp. A few weeks ago a friend told me about another organization that canceled their work with kids. And here at my camp locations we have to take our temperature everyday. So please keep praying!

Second… Kind of an EMBARRASSING story. but those always make the best. Last weekend all of the camp staff flew in to my camp location to connect before camp begins. We heard about a local park that had go-carts, bumper cars, and zip lines. Well, as you can imagine, things aren’t as safe in China. But this park seemed rather harmless. First was bumper cars. A little faster than usual and maybe a few sore necks but all went fine. Next we went over the zip line. This seemed a little more sketchy but the zip line went out over a lake and also had a safety net under the wire.

I waited my turn as most of the team went across the lake. I decided that when it was my turn I would make an effort to push off faster than normal. The Chinese man hooked my harness to the zip line and I pushed off. As I started across the lake I had another idea. bounce… so I started bouncing.

Everything was going well until I looked up to get ready for my landing. I saw the Chinese man waving at me quite urgently to pick up my legs. It was then that I realized that if I didn’t pick up my legs, they wouldn’t clear the dock. So I lifted them high into the air… But … the bouncing and my weight timed just wrong and instead of clearing the landing I landed on the landing in sitting posture.

Well apparently, I didn’t hear the back side of my shorts rip off. Maybe I was just too stunned because everyone was watching and I didn’t want to look like I was hurt. So I just calmly waited for the guy to unhook me from the harness. As I was walking down the stairs I realized that all the girls were gone.. And the guys were laughing. and that is always a sure sign that something is wrong. I went to feel my injury and realized that there was nothing back there. Just air. And on top of that, there were people everywhere!!! And I couldn’t really go anywhere. Eventually I figured out how to use my shirt for covering and decided that I’d be a little more careful on the zip line next time.

So, that started our summer off with the first of many more stories to come in the next month. that’s what I love about China, you never know what might happen next.

Here’s a note from a buddy I had last year. Looking forward to seeing the kids in less than a week: 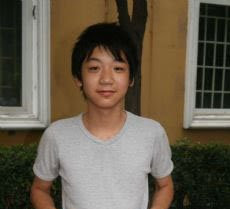 David (Big beard :>)
You played with me, laughed with me. I think it’s the happiest time I have ever had this year. It is in the BMH camp where I played with you happily! :>) I hope you could send your photos to my email. Best Wishes! Keep fit!