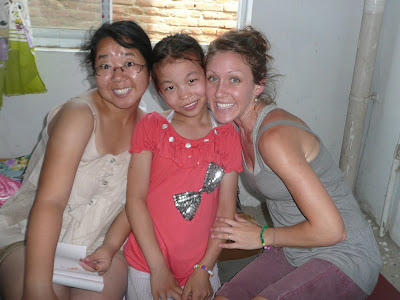 “ Then I think, ‘oh how complicated to love a person.’ I did not know this until now.” –Angela

So I have to say that as Angela and I made the four hour bus ride to Hannah’s village I was filled with many emotions. Would she still remember the anger she had towards us at times last summer? Would her joy in seeing us be crushed, as we had to leave two days later? Is she scared for her father? Is she wondering why he is still sick? So many thoughts and emotions rolled around in my mind. But I was so thankful to be going to see her and I was so thankful to have Angela by my side!

The orphanage where Hannah and her family had previously been living shut its doors about a month ago. Hannah’s family was now living at an old folks home a few miles away from where the orphanage was. As we pulled up in the taxi; there were many old folks laying in the shade at the entrance gate, as well as a few children playing amidst them. I saw Hannah right away and joy filled my heart. I rushed up and gave her a big hug. She hugged me back so I was happy. She looked so much older. She grew taller, her hair was long, her face had matured- she was more of a little woman now. Her brother was standing beside her and he too gave me a warm embrace! They (along with half the people in the old folks home) walked us through the gates and to Hannah’s family’s room. It is very primitive there; no running water, select times for electricity use, a well, and a garden that grew many vegetables. They have two adjoining rooms where there are three beds, a table, a rotating fan (which works where there is electricity), a television, and that about sums it up.

We greeted Hannah’s father and talked with him about his health. We were able to explain to him he process of sending his test results and such to different specialist. We also talked with him about their current living situation and finding him someone to care for him while the children are at school (since they go back in September). He allowed me to get the history of his illness and his family history, as well as do a little physical assessment. We were also able to take him back to the hospital and get a physical assessment done in Chinese (this was done because the specialist that is looking at his test results now really needs a clearer picture of the man he is trying to treat from afar). I am in the midst of getting all of this information off to the doctor, as we understand that it has been a year since we started this journey with him and would really love to give him some answers.
I asked Angela if we could take the children back to our hotel for a sleep over, shower, and some shopping. She thought it was a great idea and the father agreed to let them come with us. It was so fun to be with them, to have Hannah grab my hand, want to sit with me, and just to see her smile. While we were shopping for clothes she asked for my help to try on different things and she even wanted me to do her hair- it was like she had a mother for a couple days. It blessed my heart so much. She has really matured a lot. She is still a young girl in many ways, but she did not have any temper tantrums or arguments with us. She willingly allowed us to love her and loved us back. This was probably the greatest blessing.

We were able to get these kids showered (which they had not done in a few weeks. They were sooo dirty!), get some new clothes (the only pair of pants Hannah had were the little pink ones that we had bought for her last summer), stock up on soap and bathroom supplies, get some good food into their tummies, and love on them so much. Angela and I even went to the new school that Hannah and her brother will be attending the fall and talked with the head master. We wanted to tell him that if the kids need anything for school to let us know. Angela left her phone number with them and got theirs in return. I cannot tell you what a blessing it was to have Angela with me. I was just going to try and find a random translator to come, but the Father provided so much more than a translator in Angela. She cares so much for the kids too and is right there with us thinking up ideas and wanting the best for the children. She was sent straight from Above.

I know that some of Angela and my favorite times were the moments where we would just take some time and pray with the family. It was truly a blessing to get to encourage them in their faith. It is so exciting to see how the Father has placed different believers in their lives. I know this will help them as they journey on.

So Hannah’s story is still in progress. We are talking with doctors and trying to find someone to help out Hannah’s dad while the kids are at school. Though the old folks home is primitive, it is such a blessing to have them in a place where people surround them and they are getting as much help as the staff there can provide. We will be keeping up with Hannah’s schooling and any needs that her and her brother might have there.

Saying goodbye to them broke my heart. You never want to leave them when life seemed so much better when you were there with them. But this is where I get to grow more and more, knowing that He cares for them more than I ever could. And though we had to leave, He did not. He is there with them now. I am glad she knows that we love her and I am confident we will see her again soon.