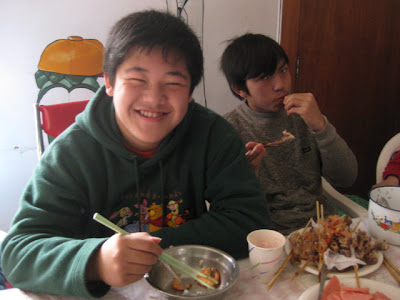 In the summer of 2006, we met a boy who touched our hearts. His name was Charlie.

Charlie shared with us his very vivid memory of being sold by his father. After the police were involved with his situation, Charlie was moved to an orphanage. But he longed for family life.

Anna (Yoder) Chang, who was living in China at the time, was able to have Charlie placed in a wonderful foster home that was run by foreigners. They recently sent us this update:

“Charlie is doing well! He is in a public school which is one of the best in our area and is just 15 minutes by his bicycle. He has grown a lot! And he is learning English, but like most of the Chinese kids they don’t want to speak it out. He gets embarrassed when he says it wrong, but we tell him its fine and the more you speak it the better you will communicate. Now when he wants to say something, he will spell it and we will speak it then he will repeat it! It’s so funny.

Charlie is doing well in school. He has a lot of awards for high scores in his subjects. He loves to cook spicy food, and is very good cooking fried rice. We tease him that we should send him to Baoding cooking school, one of the best cooking schools and well known in China.

We feel he has a relationship with HIM. He is joy to us, very obedient, smiles a lot, and is very grateful for everything we buy, give or do for him.

To sum it up if we can adopt him we will. He is our son in a lot of ways.

When you meet him you will see what a change HE done for Charlie and in his life; we give HIM all the glory.

We are very excited to see Charlie at camp this summer, and we are grateful for the progress in his and for Mike and Elisa for taking such good care of him. Praise the Lord!